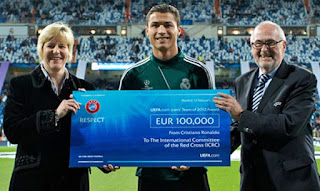 Christiano Ronaldo may be one of the world’s richest and most marketable athletes, but the Real Madrid superstar’s list of charitable contributions is as extensive as his portfolio of lucrative sponsorship deals.

The 32-year-old’s most recent philanthropic project will be to fund the construction of a paediatric hospital in Santiago, Chile, as part of a joint venture with Italian businessman Alessandro Proto — with others to follow in more South American cities.
Earlier this year, the Portugal captain auctioned off his 2013 Ballon d’Or trophy for £600,000, with all the proceeds going to the Make-A-Wish foundation. 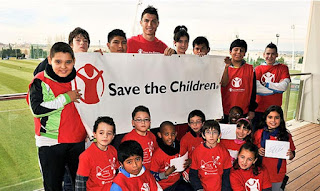 In 2016, he made a generous donation to Save the Children for food, clothing and medical care to help the plight of children in Syria.

In 2015 Ronaldo was named the world’s most charitable sportsperson by dosomething.org, and was reported as having donated £5 million to help the aid effort in Nepal following the devastating earthquake that hit the region.
He came to the aid of a 10-month-old baby in 2014, paying for a brain operation to prevent the child from having up to 30 seizures a day.
The former Manchester United forward also kept a promise made on Spanish radio to celebrate winning the Ballon d’Or that year with children suffering from leukaemia.

In 2013, Ronaldo lent his name and donated to a project to conserve the mangrove forests in Indonesia following a tsunami after seeing the footage of a young victim wearing a Portugal shirt with his name on it.
In the past he has also donated more than $165,000 to fund a cancer centre in Portugal that treated his mother, and paid for the cancer treatment of a 9-year-old boy.
“My father always taught me that when you help other people, then God will give you double,” Ronaldo said in 2013. “And that’s what has really happened to me. When I have helped other people who are in need, God has helped me more.”

150 IBIBIO AND EFIK NAMES FOR YOUR BABIES AND THEIR MEANING

Wives Must Reinvent Their Biblical Role As Helpmates – Gov Udom

Wives Must Reinvent Their Biblical Role As Helpmates – Gov Udom