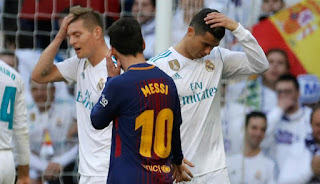 It’s ridiculous how Madrid are World Best team in Football but V.Poor in El Classico 😏. May be there is something they always get it wrong in El Classico may thought.
The first goal was Casmeiro ‘s fault as a central/defensive Midfielder you don’t expose your center backs by carelessly going forward allowing other CM to take advantage one determine run you are finished that’s exactly what Rakitic did . 😕 And it led to the goal
Ronaldo is the best player May be that’s what get in to his head most times at times he gets away with silly mistakes most times he doesn’t. He should please add a little generosity to his game (mbok) in the first half Marcelo freed him in acres of space he had options to pass to Modric, Casmeiro or Klose but he chose to go all alone and squander such opportunity. He had much of the ball than Messi he failed to be productive like Messi.
Congratulations to Barcelona the better team picked the three point .
Man of the match
Paulinho.

REAL MADRID VS BARCELONA WHAT YOU SHOULD EXPECT