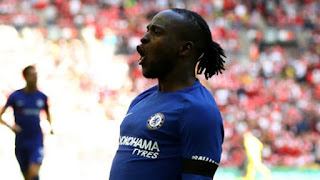 By Ekemini Nelson
The Nigerian superstar has been named as the continent’s best for the last 12 months. Nigeria’s Victor Moses has been named Goal Africa Player of the Year for 2017. The Chelsea wing back has won the award ahead of the likes of Gabon’s Pierre-Emerick Aubameyang, Guinean Naby Keita, Sadio Mane of Senegal and Egyptian superstar Mohamed Salah.
Moses enjoyed a remarkable transformation during the 2016-17 season in an unfamiliar role, winning over the doubters and earning his place at Chelsea despite appearing destined for the exit door. He was introduced into the starting lineup in late 2016 in an unfamiliar wing-back role after Antonio Conte saw in the former Crystal Palace attacker a key solution to a problem position.
Throughout early 2017, Moses was a key figure for the Pensioners as they won the Premier League title, with the wideman only losing twice—against Tottenham Hotspur and Manchester United—before the FA Cup final defeat by Arsenal. Victor Moses After being dismissed in that match, Moses bounced back with the equaliser in a 1-1 draw against Arsenal in the Community Shield final at Wembley, before Arsenal went onto clinch the trophy on penalties.
He’s had to contend with injuries this term, but excellent displays against Tottenham Hotspur Newcastle United have reaffirmed Moses’s importance at Stamford Bridge. At international level, Moses, performance couldn’t go un noticed.He made 11-man shortlist for Caf’s African Footballer of the Year award, played an influential role in Nigeria’s successful qualification for the 2018 World Cup. After some excellent performances in late 2016—notably when he scored twice as Algeria were defeated 3-1—Moses stole the show as Nigeria demolished Cameroon 4-0 to take a stranglehold on top spot in Group C. It was a magnificent display by the 27-year-old, playing in a more advanced role, and it was arguably the outstanding performance in a superb year for Moses.
">
">
ADVERTISEMENT
Previous Post