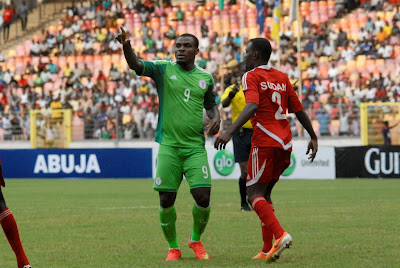 The Eagle lost Captain and Goalkeeper Ikechukwu Ezenwa, to injury after just 11 minutes. And was force to play the remaining half hour with 10 men, after Akwa United winger Ifeanyi Ifeanyi was dismissed following a two footed nasty challenge.

Okechukwu Gabriel got the only goal of the game on

Replacement keeper Oladele Ajiboye pull a number of great saves to keep Nigeria in fore front also thanks to some poor finishing from Sudan, who also had a man sent off late

Just five minutes after Ezenwa, who has also been first-choice keeper for the full national team, was forced off through an injury. Kalu Okugbue launched a long ball forward that was flicked on by Anthony Okpotu into the path of Gabriel, who guided his shot calmly in to the net
.
Ajiboye’s first impressive stopped came on the stroke of half-time as he dived to push a header on to the post, with the Sudanese claiming the ball had crossed the line. Replays showed it had not.

Thirteen minutes after the break Nigeria were reduced to 10 men as Ifeanyi slid in with both feet on his opposite number Mohamed Hashim Idris to get his second yellow card, which means he will miss Sunday’s final.

The Sudanese were then denied twice in injury time as Ajiboye made another good save, then he and a defender managed to scramble the ball off the line.Nigeria stood firm to see off the fierce contest,with the victory Nigeria became the first country to defeat Sudan in Chan Tournament.The Eagles now meet host Morroco on Sunday Final whilst Sudan face Lybia in the bronze medal match

A' IBOM GOVERNMENT VOWS TO TURN AROUND THE FIRE SERVICE

A' IBOM GOVERNMENT VOWS TO TURN AROUND THE FIRE SERVICE

150 IBIBIO AND EFIK NAMES FOR YOUR BABIES AND THEIR MEANING

Capacity Development, Industrialization Should Define Next Phase of Leadership in A’Ibom- Onofiok Luke

Nigeria at 61: Pres. Buhari Orders Lift on Twitter NG Ban with a Condition

Capacity Development, Industrialization Should Define Next Phase of Leadership in A’Ibom- Onofiok Luke

Nigeria at 61: Pres. Buhari Orders Lift on Twitter NG Ban with a Condition