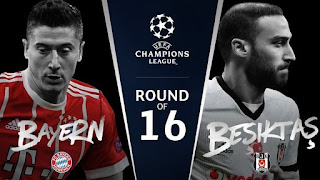 Bayern Munich will attempt to reach the quarter-final for seventh straight season against the round of 16 debutants Besiktas.
Since their shock 3-0 loss to Paris on match day 2, they’ve have found their footing both domestic and European Competition. Munich is on course for a treble. Jupp Heynckes has led his team to 13 straight victories. Besiktas are worthy opponent there’s no doubt that the challenge will prove too much for the knock out stage debutant.
Heynckes on Besitas, said they won’t come to hide,they were unbeaten in group stage. They wil likely come out of their shell to attack and take chances. I hope my team will be at their best. I expect the German Champions to finish the job in the first leg.
Besitas Coach Senol Gunes on Bayern, they are the third most successful team after Milan and Real Madrid in this competition. We will try to give a good performance and take our chances. It’s football anything is possible… It’s the first time we will go into a match as under dogs.
Possible Line-ups
Bayern: Ulreich; Kimmich, Boateng, Hummels, Alaba; Vidal, Müller, James; Coman, Robben, Lewandowski
">
Out: Neuer (foot)
Misses next match if booked: Kimmich, Rudy, Tolisso
Added to squad since group stage: Neuer, Wagner, Wriedt
Beşiktaş: Fabri; Gökhan Gönül, Pepe, Vida, Adriano; Hutchinson, Medel, Quaresma, Talisca, Babel; Vágner Love
Out : Kavlak (shoulder), Atınç (knee), Gökhan Töre (knee), Tošić (arm)
Misses next match if booked : Tolgay Arslan, Caner Erkin, Talisca
Added to squad since group stage: Larin, Vágner Love, Vida
">
ADVERTISEMENT
Previous Post