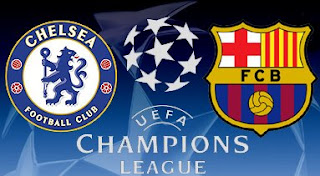 Build up to the Uefa Champions League of 5th and 6th last sixteen knockout tie.
It another big night in Europe. English teams have been in a devastating form bellied domestic form. 9javendor Sport Team brings you all the essential as former Champions Chelsea and Barcelona write a new chapter in their European rivalry. Will history count at the Bridge?
This will be tighter than most have predicted. Drawing against the reigning English Champions is tough said Valverde, they have their own style of play with quality players underrating them will be dangerous for us it’s another Champions League Match. Chelsea have had the upper hand in past meetings W4 D5 L3. Lionel Messi hold a scoring jinx against the Blues, he’s yet to score in Eight meetings. Chelsea boast one of the best defense in England beating Barcelona will open a new chapter of their season given their domestic struggle. Antonio Conte hinted on his side readiness to suffer without the ball due to his opponent style of keeping the ball and dominating possession. If we win the ball we try to do our thing.
Barcelona have been spectacular under Ernesto Valverde surveillance. The Catalans are unbeaten in La LIGA and are seven-point clear at the summit… were unbeaten in the group stage. Much will depend on Lionel Messi, if he can break his curious jinx against Chelsea tonight. He’s the best in the world can pop up any moment difficult to tame – keep the Argentinian quiet and Conte’s side have more than a chance.
Possible line-ups
Chelsea: Courtois; Azpilicueta, Christensen, Cahill; Moses, Kanté, Fàbregas, Alonso; Hazard, Pedro; Morata
Out: Barkley (hamstring), David Luiz (unspecified), Bakayoko (unspecified)
Added to squad since group stage: Barkley, Giroud, Emerson
Barcelona : Ter Stegen; Sergi Roberto, Piqué, Umtiti, Jordi Alba; Busquets, Paulinho, Rakitić; Iniesta, Messi, Suárez
Out : Semedo (suspended), Vermaelen (muscular problem)
Added to squad since group stage: Arnaiz, Costas, Mina
">
">
ADVERTISEMENT
Previous Post

HOW TO SUCCEED (PHOTO)